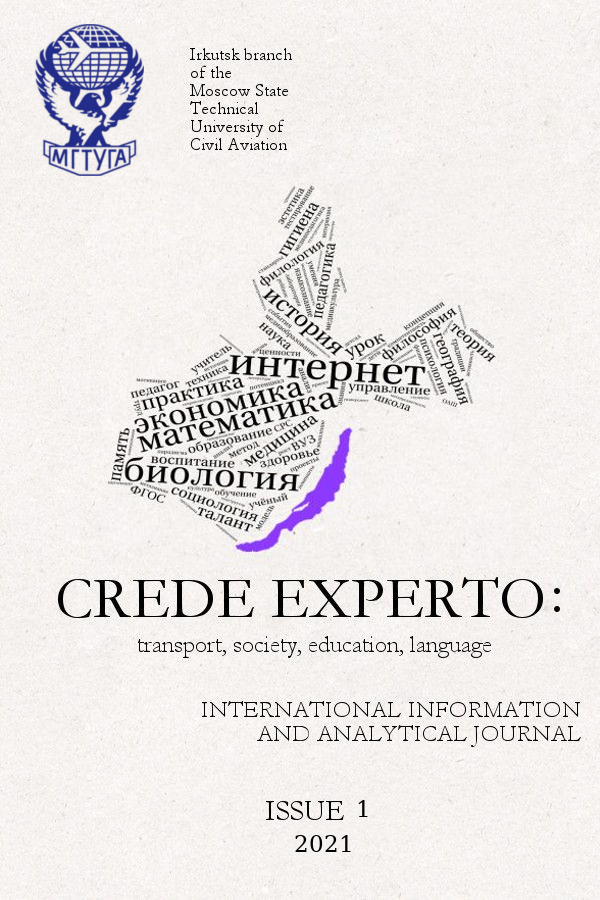 Abstract. The article presents a new original method of geometric visualization of particle (or aircraft) motion in space and time. The urgency of the proposed method stems from disadvantages of the traditional method of presenting the motion in space-time having as one of its coordinates theĀ Ā  time which is independent on spatial coordinates. In this space-time, the concept of distance between two points is not defined, the concepts of angle, triangle, geometric figures are not defined as well, it does not allow Euclidian geometry to be used. The author proposes the use of four-dimensional Euclidian space with the fourth axis z = bt where b is a speed constant, t is time, for presenting the motion of a particle (aircraft) in space and time. The particle (aircraft) motion presented with the use of the space proposed by the author is a visualized one, the track makes geometric sense of a Euclidian geometry line. The examples of presenting the four-dimensional motion of an aircraft along its route are given, the concept of four-dimensional corridor of aircraft motion is defined. It is shown that the proposed method could be used for description and research of particle (aircraft) motion in space and time. The method opens up a new direction of research of particles and other material objects moving in space and time with the use of multi-dimensional, in particular, four-dimensional geometry. The importance of the approach proposed in the article is that it opens new directions of scientific research in such sciences as physics (not relativistic mechanics), navigation and air traffic control, space mechanics and many other sciences in which processes of motion of different objects in space and time are researched. The author is going to continue publishing the results obtained due to the proposed method which are not included in the present paper because of space limitations.

Abstract. The paper describes the analysis results of the existing automated means used in civil aircraft avionics verification. The main solutions on the market and their advantages, disadvantages are considered. Based on the analysis results, it is found that a promising direction in this type of means development is to provide testing automation of graphic and aural information within the hardware-in-loop verification (including bench tests). The task is relevant not only for the aviation industry, but also for any technical objects using a human-machine interface (space industry, automotive, shipbuilding, etc.).

Abstract. The work is devoted to the analysis of problems during the flight on four-dimensional navigation routes in civil aviation, determining the minimum necessary requirements for a decision support system that would provide a solution to these problems, as well as developing a methodology for searching an optimal four-dimensional route.

Abstract. Interdisciplinary approach is a basic research method of contemporary human sciences. Abroad, they reveal intralingual categorial interaction as well as interlingual interference and personal identification. In the last studies of Russian linguists, there are methods, principles and technologies of categorial transfer revealed. In cognitive linguistics, the problem of new definition of language and their functions is discussed. In this paper, the author continues the study of categorial interaction that was started in her previous work. Now, the study is devoted to analysis of verbal communication in monographs by domestic and foreign linguists. The author proceeds from the methodological principle of system holism that defines language type and cultural system based on context relation. In her analyses, the author uses the method of interpretation to explain the terminology and language units. She has revealed some specific features of categorial interaction in everyday, political and textual communication. Also, she has confirmed the thesis by Edward Hall about the fundamental meaning of the cultural context that defines language functioning. She precises the value of language system in verbal communication.

The research opens the perspectives for further studies which can generalize the interdisciplinary methods of linguistic analyses. These methods are high demand in a lot of spheres: by supervision of research, by expert supervision of theses and scientific papers as well as by participating on scientific symposiums and preparing the papers for publication.

Discourse and Text: vectors of research

Abstract. The article characterizes Russian Germans, their language, culture and mentality within the framework of contact linguistics, reveals the essence of the definition of Ā«discourse communityĀ» in general, as well as Ā«discourse community of Russian GermansĀ» in particular. Considering that the present research is carried out on the material of the artistic discourse of Russian Germans, the article gives a brief definition of the notions of Ā«discourseĀ» and Ā«artistic discourseĀ». The work was carried out within the framework of the study of the nominative theory, therefore, it reveals the essence of the notions of Ā«nominationĀ» and Ā«secondary nominationĀ», by means of which the emotional component in the nominations of the notion of Ā«HeimatĀ» realizes.

The practical part of the work studies the emotionally colored nominations of the notion of Ā«HeimatĀ» in the artistic discourse of Russian Germans. A comparative-contrastive analysis of the dictionary definitions of the lexemes Ā«emotionĀ» and Ā«EmotionĀ» is carried out, the key components of the notion of Ā«emotionĀ» in Russian and German languages are revealed. Further, a component analysis of the surroundings of the lexeme Ā«HeimatĀ» is carried out both at the verbal and non-verbal levels, as well as from the standpoint of lexical, stylistic and grammatical analysis.

Francien dialect and scripta: contours of the francien scriptural zone

Abstract. The franciŠµn scriptural zone includes the scripta of Paris, OrlĆ©anais, Soissons, Senlis and CompiĆØgne. The scripta of Burgundy constitute particular scripta. The status of scripta of Berry and Turraine requires a specialized study. The francien scriptural zone, medieval, corresponds in broad lines, but not totally, to the dialectal zone, current. The territory of the francien scriptural and dialectal zones does not correspond to that of the current Region of Ćle-de-France.

Abstract. The article deals with the main types of affixation as one of the leading mechanisms of term formation based on the components Dialekt / Mundart, which are the basic concepts of German dialectology. The main attention is paid to the identification of productive affixes, on the basis of which terms are able to form new terminological nests. The predominant use of affixes of Greek-Latin origin, as well as affixes of borrowed nouns and adjectives, allows to indicate the tendency for the further consolidation of the borrowed term Dialekt as the most commonly used.

Abstract. The paper considers the concept ukhel ‘death’ verbalized by phraseological units of the Buryat language in the linguoculturological aspect. Differences in understanding of the concept ukhel ādeathā in the Buryat naive view of the world and the scientific type of consciousness, namely, the belief in the existence of the soul after death in the linguistic view of the world and its denial in the scientific world-image are revealed. The existence of phraseological units with the meaning of death demonstrates the connection with the ancient ritual actions for the burial of the deceased, which is confirmed in the Mongolian literary work “The Secret History of the Mongols” in 1240. The naive view of the world of Buryat speakers-Buddhists through phraseological units reflects the understanding of death as a transition to another level of life, in a new physical body, but the subsequent life depends on the previous way of life. The worldview of shamanists is also reduced to the belief in an afterlife, but in the existence of a disembodied spirit. Phraseological meaning is developed by metonymization and metaphorization from the original free phrase. At the same time, a more significant role of the denotation is noted. A bright functional and stylistic differentiation of the phraseological unit about death is revealed. The semantic field ukhel ‘death’ demonstrates the breadth of the functions of this lexeme.

Abstract. The article deals with the urban legends of Pavlodar associated with one of the key places of the Pavlodar local text – the City Garden of Culture and Recreation, known among the citizens as the City Garden. The study analyzes the role of mystical motifs present in these legends in their pragmatic and historical-cultural aspects.

Abstract. The modern world needs competent and mobile medical professionals who can work in a multicultural society in any country of the world. The aim of this paper is to determine the structure and content of the Ā«Foreign languageĀ» discipline to contribute to more conscious, active and motivated learning of the subject. The methodology is based on Federal state educational standards, programmes of Ā«Foreign languageĀ» discipline for higher educational institutions, and existing literature on the problem. To determine the specific situations of further use of a foreign (English) language, a focus group survey was conducted. The result of the research is the substantiation of the Ā«Foreign languageĀ» course structure with the suggested topics and grammatical material distributed in modules. The authors of the study propose a course model consisting of three consecutive modules based on the content and the studentsā needs. The proposed model will allow forming the universal competencies necessary for a future doctor and integrating into the professional community without any problems.

The need of humanitarian knowledge for creative education

Abstract. The article examines the features of the modern higher education system in the aspect of the excessive focus of the curriculum on the formation of practical skills of students. Employers need a professional who can immediately take up their duties without long-term training. At the same time, employees with leadership qualities and creative thinking are more appreciated. These qualities are part of the humanitarian knowledge. Only with highly educated and creative specialists is it possible to successfully modernize production, increase the competitiveness and business image of companies. The creative abilities of a person depend on the characteristics of the work of the right and left hemispheres: figurative and logical components, harmoniously combined when analyzing problems. It is the ability of analysis and synthesis that higher education is called upon to develop, this is its mission. The gap between technical and humanitarian knowledge is the reason for the lack of initiative, creativity and ethical responsibility of university graduates.Ā The global reorientation of society towards knowledge that is useful from a material point of view leads the heads of universities, applicants and their parents to an erroneous point of view about guarantees of professional efficiency. The work proves that humanitarian knowledge, more than any other, effectively influences the formation of high-quality logical thinking, creative consciousness, self-awareness, social and professional qualities. The concept of creativity and linguistic creativity is revealed in detail. Humanitarization is considered as a process of saturation of curricula with disciplines of the humanitarian cycle. And also as a system of thoughtful and balanced measures aimed at the priority development of general cultural competencies, presented in the goals and objectives, the content of academic disciplines, learning technologies focused on the comprehensive development and improvement of the human personality, which is central to the structure of social relations. The essence of the humanization of education is the recognition of the spiritual world of a person as the highest value, the raising of ethical questions at the center of educational activities.

Pragmatics of numerals in weather report

This article is devoted to the role of numerals in the daily life of French society. The research material included texts containing meteorological data. The conducted analysis allowed to reveal two major functions of the numeral: exact indication (accuracy) and approximate value (approximation).